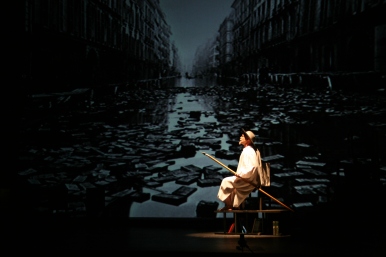 The Great Knight Don Quixote of ‘La Mancha’ is an Italian-language opera in four acts (prologue, two interlude-ballets and ten scenes of lyric-ballet) composed during more than ten years (2000-2013) by Matteo Fania to an Italian libretto by Giovanni Privitera.

Characteristics of this opera

The originality of this work is based on two fundamental factors:

1. Libretto: the librettist Giovanni Privitera made a careful quixotic language translation, from Castilian to vulgar Tuscan, and trough the study of the Luigi Pulci’s epic and parodistic poem ‘Morgante’ he managed to adapt Castilian parody of Cervantes.
This opera is not intended as a philological staging but an open work that trough the Quixote explores its dreamlike contents. Trough scenes and ballets appear the characters of the books that he reads.

2. Music: The style of the music that accompanies this opera is called ‘Sensory Composition’. This style was created by the composer and adapts to the characters’ personalities.
In this opera each character can express themselves trough a musical instrument, and every instrument is solo.

Structure of this opera

Prologue
(Don Quixote’s dream)
Ballet inspired by the triptych painting ‘The battle of San Romano’ by the Florentine painter Paolo Uccello, and by the Sonnet ‘Orlando Furioso to Don Quixote of La Mancha’ by Cervantes.

Interlude I
Ballet wherein is related the droll way in which Don Quixote had himself dubbed a knight.

ACT I
Scene I
(Scena e romanza)
Don Quixote fighting with an imaginary magician Friston, guilty of the disappearance of his books
(ballet of the rejected books).

Scene V
About what happened to the ingenious gentleman in the inn which he took for a castle.

ACT III
Scene VI
About the pleasant discourse that happened between Don Quixote and his Squire Sancho Panza.

Scene VII
About the freedom Don Quixote conferred on several unfortunates who against their will were being carried where they had no wish to go.

Scene VIII
About the strange manner in which Don Quixote was carried away enchanted and Sancho is involved in a soliloquy.

Scene X
Ballet ‘The fagot aimlessly’ and conversation between Don Quixote and the Death.